We all know a good story when we see one and a bad one when it’s a dyslexic collection of ideas. A clean and linear narrative is the most effective way of telling a story unless you are trying to be the next Quentin Tarantino. A lot of movies nowadays are lax in editing and just release three hour movies because they don’t try hard enough to edit a good story down to a bearable two hours. Worse are those who try to be artistic with the Tarantino style of randomly throwing scenes in random chronological order.

Our photographs have always been about narrative from the beginning. Modern weddings especially need more attention to tell a linear narrative due to multiple camera angles all shooting at the same time. You don’t even want to know what it feels like to cull through almost five thousand images, only to narrow it down to twenty percent of the original length to tell a story. We narrow it down to two percent for a blog post!

On the technical side, photographers know to sync their camera time so organizing the photos on the computer becomes an easier task. Camera syncing has limitations, since it is technically manually pressing the SET key while you watch an external clock tick at the chosen timestamp. Not so different from the old movies with Special Ops or Oceans Eleven when the team all set their watches to the same time with a verbal cue. The best we can do is an accuracy of plus or minus one full second. The camera EXIF data does not record in milliseconds. Sometimes the crucial moments during a wedding day happens within a fraction of a second, a priceless reaction, a snatch of the bouquet, or the spin of the bride. Multiple cameras capturing the same moment, and sorting the photos after, can have a few overlapped photos that just doesn’t seem to line up perfectly because of the error tolerance of the timestamp. Even if the timestamp could somehow be synced accurately to the millisecond, the linear narrative of the photos to the audience would still be a seizure of multiple camera angles jumping back and forth. Imagine watching a movie that worked that way.

Emotion over accuracy is the key to wedding photography, or any artistic narrative.

[insert tangent story]
I once covered a wedding alongside the “uncle with the camera”. We both took the same photo and reviewed our images on the LCD. He glanced over at mine and suggested that I color balance my photos. I glanced over at his, super cold and blue image of a warm and happy scene. I said “No, thank you.”

Just as the color temperature of a photo needs to please the eye of the audience rather than that of a camera calibration technician or the uncle, the flow of images that tell the narrative is more important than the exact timestamp. This is not a historical documentary, this is a wedding story. When we curate the photos, we sort by timestamp first, then we go through the entire day of photos and we manually sort the images to flow easily to the audiences’ eyes. A scene with multiple cameras is easier to digest when the entire sequence of a moment from one camera is presented and preceded by the next camera angle. Even if the action repeats itself, it is still narratively and visually more cohesive to stay with one camera at a time than to flash back and forth. 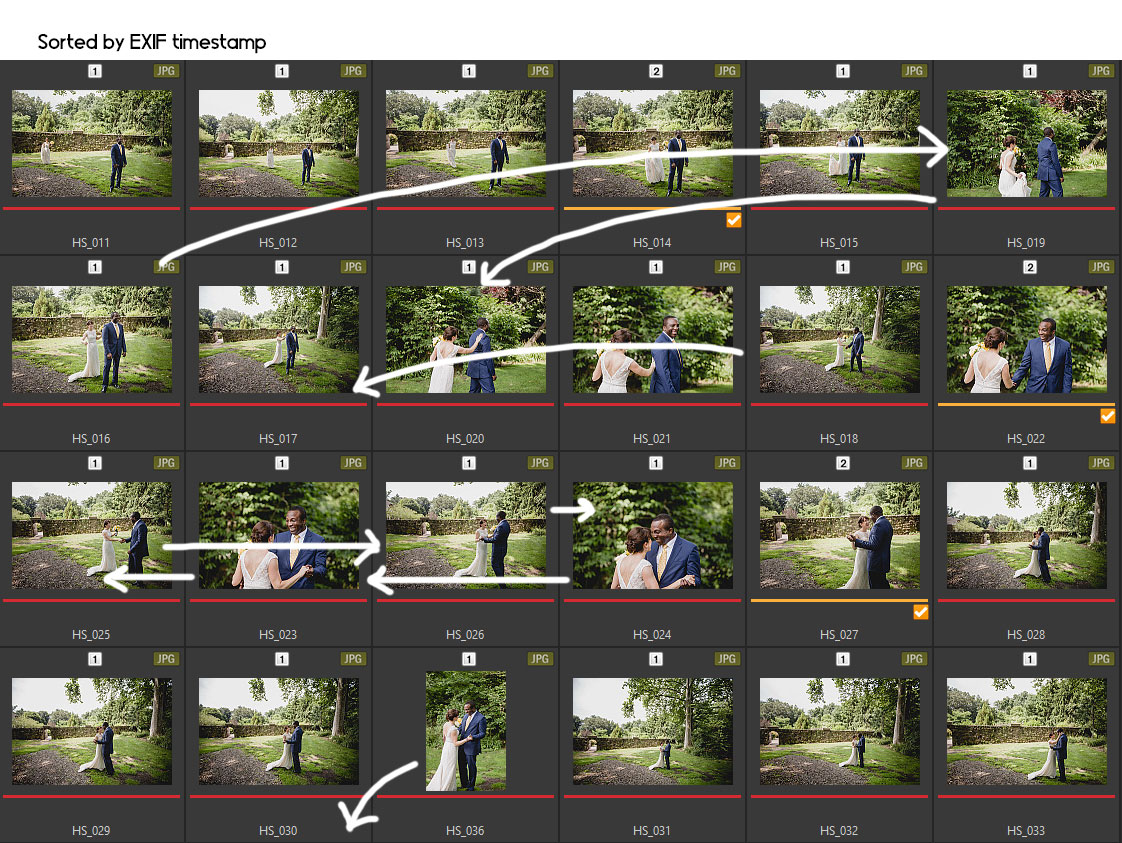 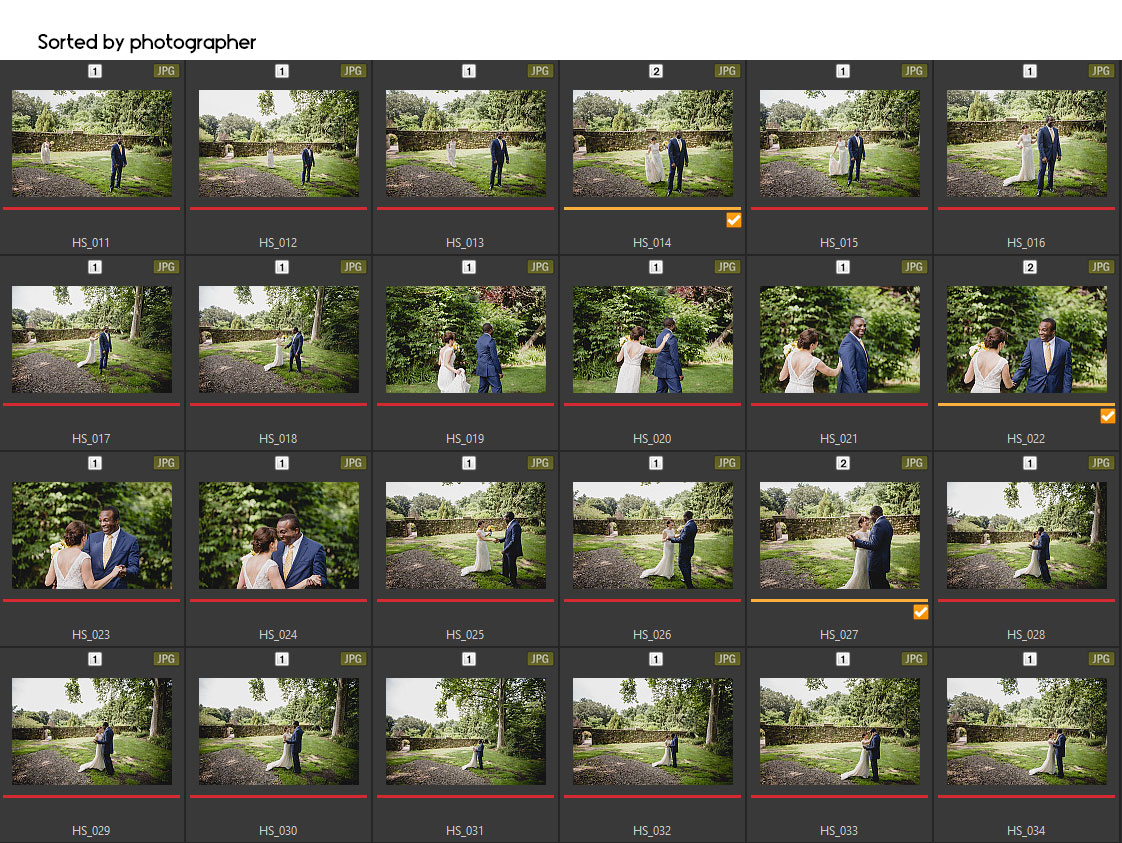 There are two major benefits to this manual editing of photo order. The first and most important reason has been described above, it helps keep the narrative flowing smoothly through the hundreds of photos over the course of the day. The second reason is the advantage of selecting the perfect photo to show off. Remember the game where you had to spot the differences between two similar photos side by side? It was already hard enough when those photos were static next to each other, now imagine how much more difficult it would be if the photo were to flash one at a time, but with a completely different photo in between. Combining the same sequence of photos in a row allows anyone to scroll through the moment and find the perfect shot they want to save, sort of like your smartphone’s burst mode, allowing you to see the subtle differences between each frame and giving you the best option. This task would be nearly impossible if there were other camera angles mixed in between. This extra step of manual work by us photographers make your life a lot easier and a lot more fun reliving the story. 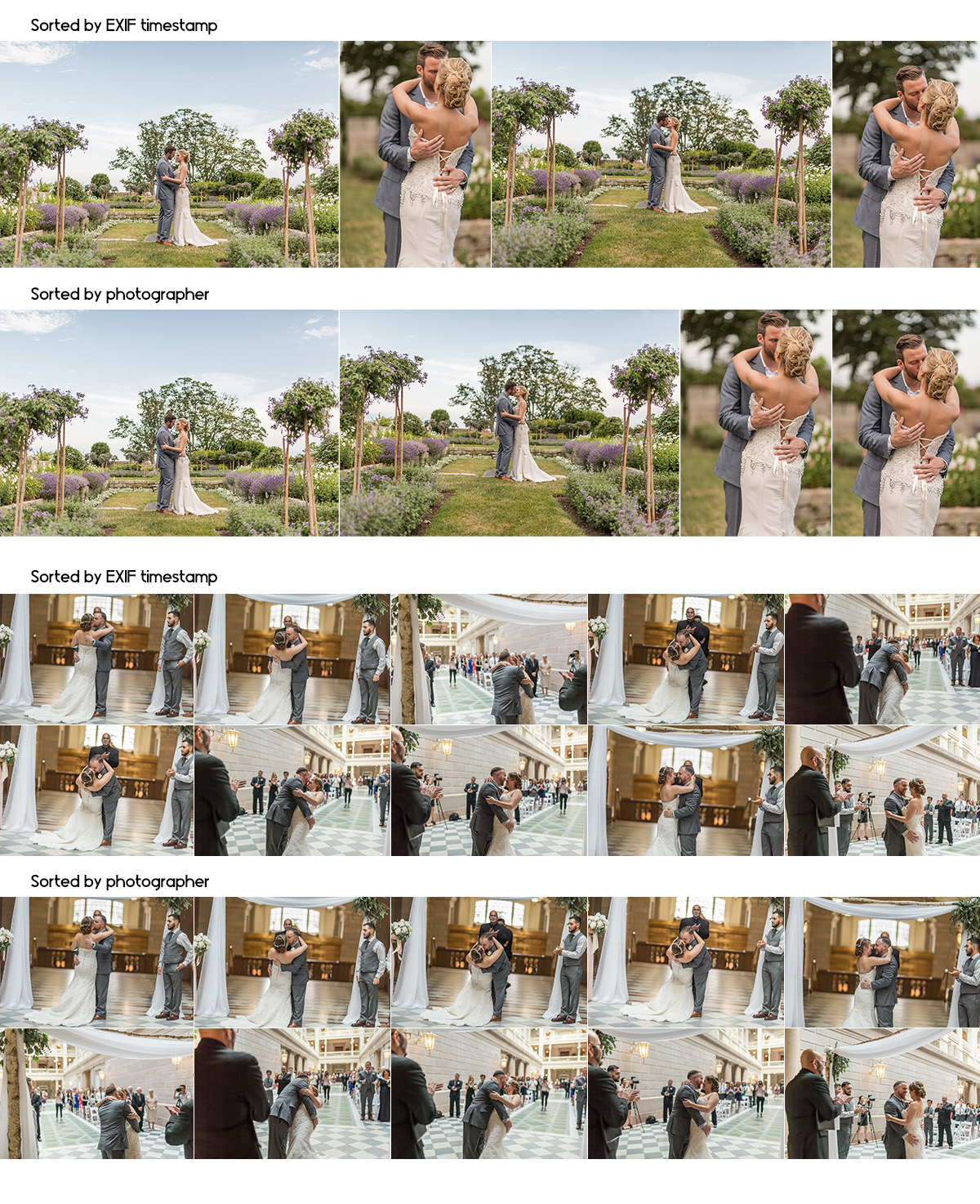 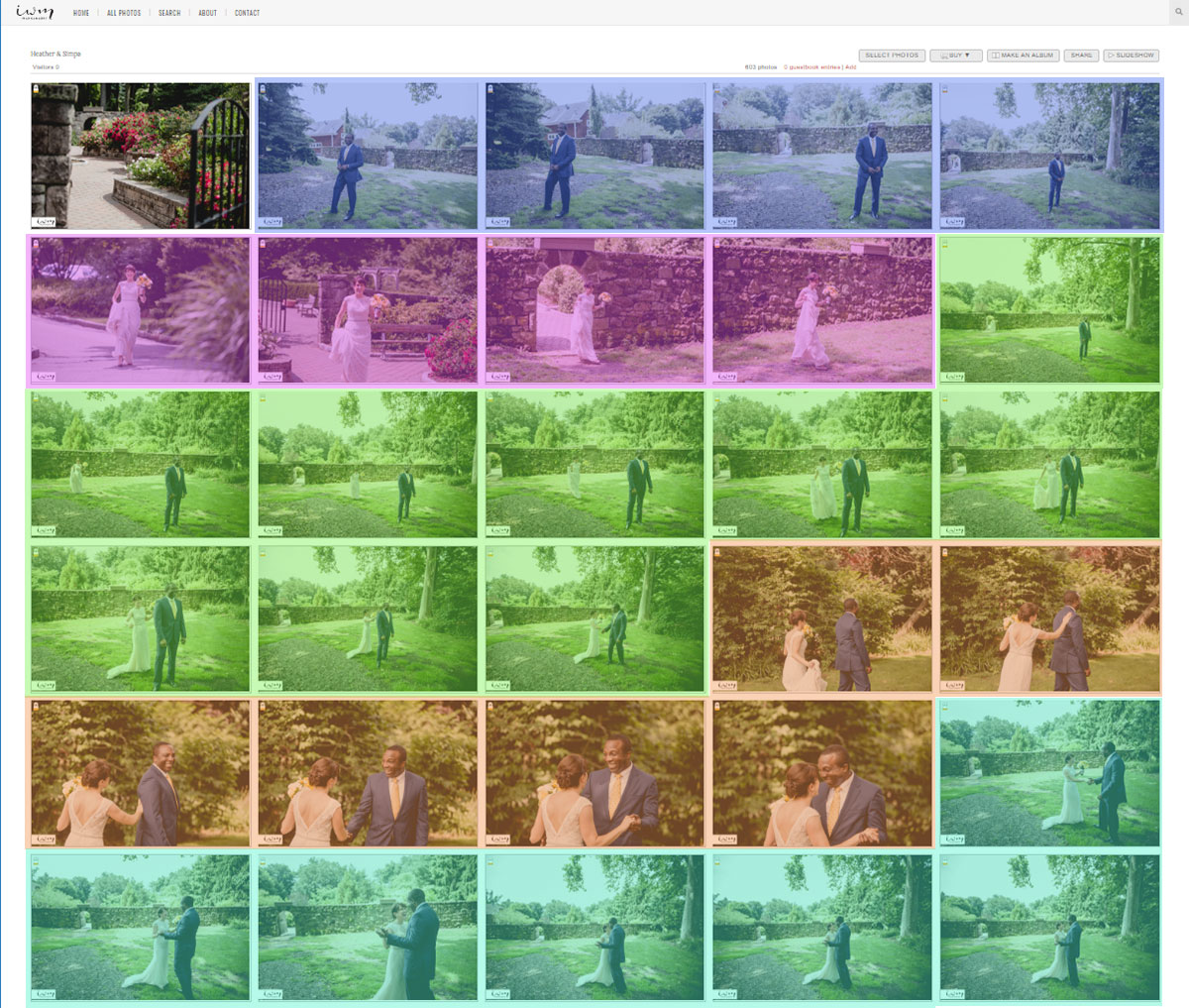 I hope this helps everyone realize that natural storytelling from photographers does not just come straight out of the camera. A good narrative requires hand crafting and understanding of a wedding day that only years of experience can bring. Having access to professional equipment and downloadable Lightroom presets does not make anyone and everyone a true wedding storyteller. 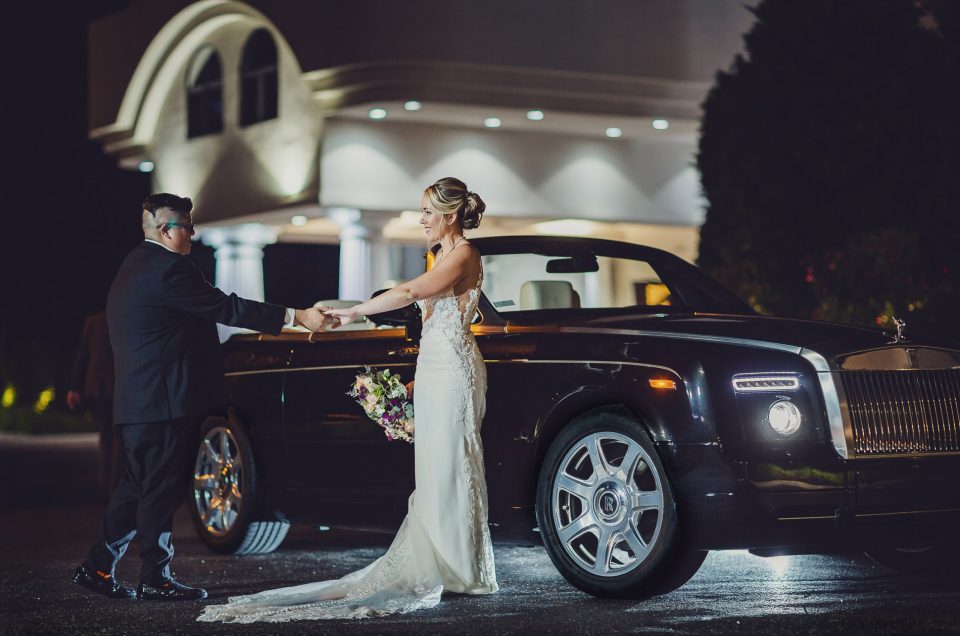 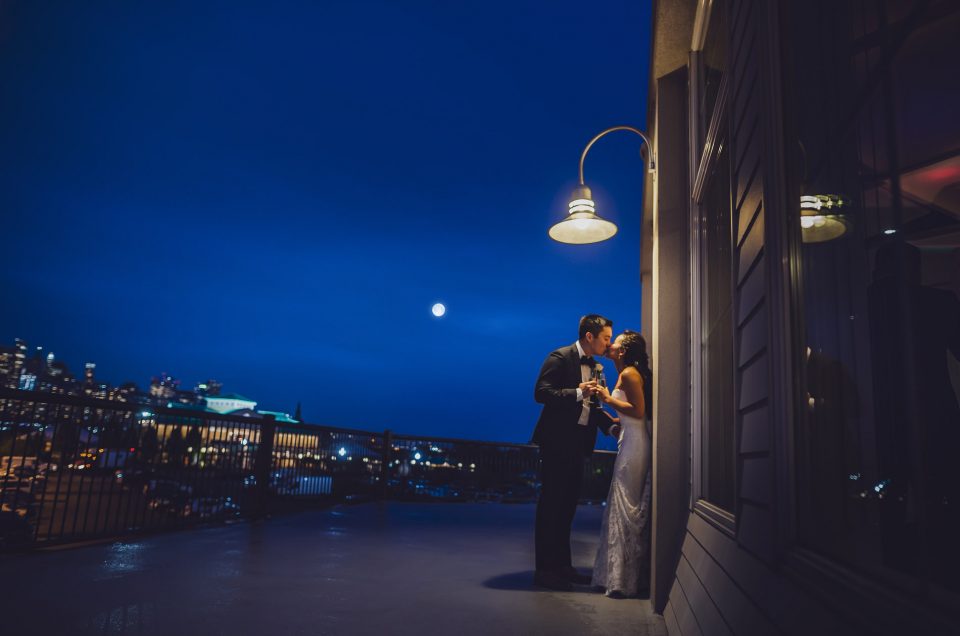 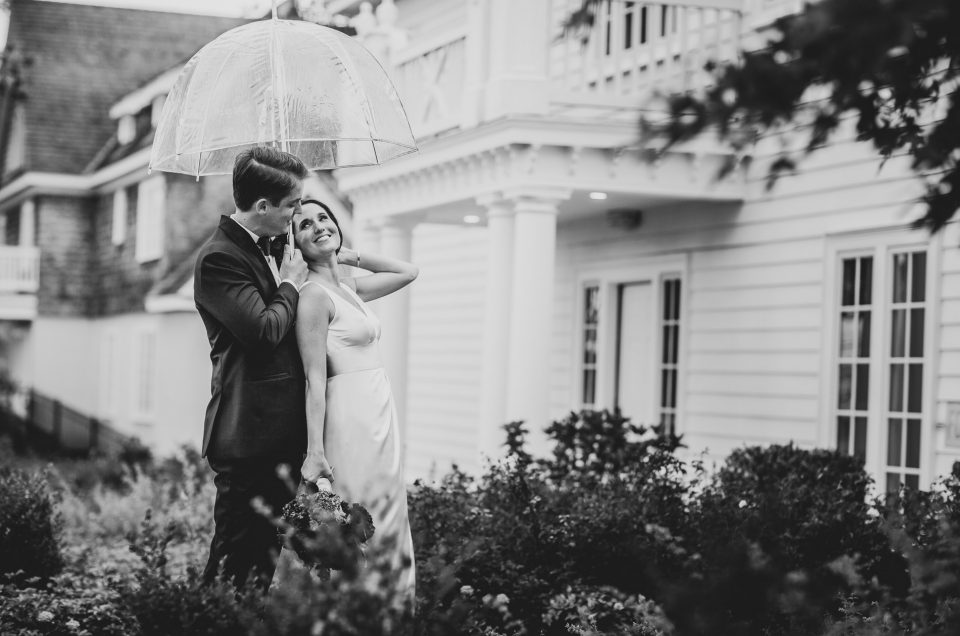